Emena Advisory was founded in Paris in 2012 by Abdeldjellil (Djellil) Bouzidi. Djellil is an economist, consultant, researcher and lecturer. He is a tought leader in sustainable finance and co-authored a book with Pr. Michael Mainelli where they created Sustainability-Linked Bonds (also called Environmental Impact Bonds and/or Policy Performance Bonds).

Combining expertise in sustainable finance, capital markets and risk management with a strong strategic focus, he executed and managed several assignments for leading financial institutions. Before creating Emena Advisory, he also worked as a senior manager in charge of new products within a large investment bank.

A graduate from Catholic University of Leuven; he received a M.Sc. from Paris Dauphine and a Ph.D. in industrial economics from Paris Sorbonne Nouvelle University and completed several executive education programs at IMD Lausanne and London Business School.

Djellil is also member of the French Official Statistical Authority (Autorité de la Statistique Publique) named by the French speaker in 2015 and then in 2021 and of several leading think tanks (Terra Nova, The Bridge Tank). He has been named by Revue Banque one of the most consulted experts.

How climate cuffs could save the planet - for a Sovereign Sustaianbility-Linked Bond (2020), with Pr. Michael Mainelli OMFIF

Revue Banque all publications (in French) 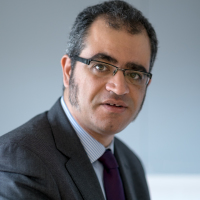